What is Rock Salt? 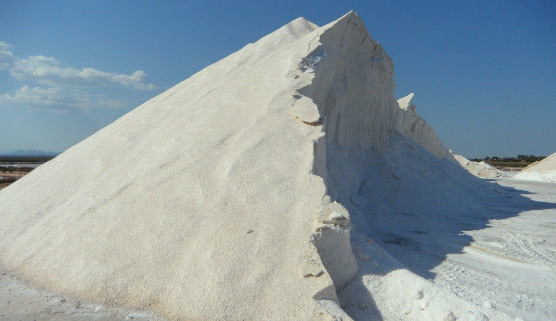 Found all over the world, salt is an incredibly versatile mineral that has a huge variety of uses in our everyday life. Weather its spread onto the roads during winter, or sprinkled over your chips at dinner time, here is some of the different forms of salt along with some common uses.

Road gritters spreading salt will no doubt a familiar sight during the winter months, and for good reason! Gritting the roads with salt is essential to keeping the them safe for pedestrians and vehicles when snow and ice comes our way. When salt comes into contact with ice, it lowers the freezing temperature to approximately -6.5°C to -9°C. With less ice on the ground, it is much easier for vehicles as well as foot traffic to maintain traction.

The salt that is spread on the ground is not safe to eat, this is because it has been treated with an anti-caking agent that stops it from clumping together. Finely crushed rock salt makes it much easier to spread evenly and prevents blockages when passed through a salt spreader. If you are new to gritting, there are 2 different kinds of gritting salt – white and brown.

Brown Rock Salt:
Brown rock salt is mined from deep underground and brought back to the surface using specialist machinery for processing. Salt mines are so huge, they often serve other purposes such as storage for important documents. The mines can be so deep that once some of the bigger mining machinery breaks or becomes obsolete, they are left there – as it is not financially viable to bring them back up! The biggest salt mine in the UK is Winsford, which produces 60% of all of the mined salt in the UK.

The brownish red colour of mined rock salt comes from trace amount of clay. This becomes noticeable when the ice and snow melts into slush and leaves behind a brown residue that can be tread into carpets. If easy clean-up is something you need, white salt could offer a cleaner de-icing solution.

White Rock Salt:
White salt, otherwise known as marine salt – is formed from evaporated sea water. This is achieved in large salt pans in countries that have a warm climate with plenty of sunshine. Evaporating sea water is an incredibly old form of harvesting salt that dates back to Ancient Rome. Back then, soldiers would actually be paid each day in salt instead of currency so they could preserve food. As refrigeration was not possible, salt in this era was very valuable. Historians believe that this is where the term ‘salary’ originates from.

When the sea water evaporates into the air, it leaves behind a clean white salt crystals that when spread on the ground works just as well as brown rock salt - but is much easier to clean up afterwards. White de-icing salt is therefore commonly used in spaces where lots of people would walk through like car parks or shopping centres.

Not just a tasty seasoning that can massively improve our food, salt is actually important to our diet as sodium helps regulate fluids in the body.

Edible table salt is the very finely ground salt that you would expect to find in any saltshaker. Edible rock salt (known in US as Kosher salt) is a much larger crystallised form of salt that is usually added to grinders or added directly to foods for texture & flavour.

It is important to remember that everything when it comes to diet need to be in moderation, and too much salt can have very harmful effects on the body over time leading to high blood pressure which can cause a range of health issues such as heart disease. The NHS recommends limiting your daily salt intake to 6 grams per day for adults, which is approximately one teaspoon. If you are concerned about salt intake, check the label on any processed foods for salt contents and dietary information, but be careful - some labels sneakily divide the contents into ‘portions’ e.g. one can of soup may be 2 portions.

Pink rock salt, sometimes known as Himalayan salt has become very popular in recent years due to its striking colour. In supermarkets, you may find pink Himalayan salt products such as regular table salt or even a stylish lamp carved from a large chunk of salt. Some of these products often boast that pink rock salt can have a variety of benefits ranging from improving sleep, boosting blood flow and increasing serotonin in the brain. Although these it sounds impressive, sadly these claims are bunk and if you look closely at the fine print of a product, you will often find the claims walked back.

Epsom salt, otherwise known as Magnesium Sulphate, is not actually salt at all! It gets the name due to the location it was discovered, Epsom in Surrey, UK and its flaky white crystals that appear similar to rock salt.

Epsom salt is popularly used as a remedy to help treat a variety of minor ailments when added to bath water but is also used in agriculture to treat soil that is lacking in magnesium. There are no conclusive clinical trials that confirm the medicinal benefits of Epsom salts, as they are primarily added to bathwater to theoretically help relax sore muscles or soothe aches & pains. Although they will make your bath water silkier, just keep in mind that they won’t necessarily have any medicinal benefits.